You can call me Kitchen Boss

In real life, a more than a few weeks have past since the Maple Glazed Pork Roast, but in blogland it's just been just days!
It's my turn to cook dinner. I looked at every picture-cookbook that we own and nothing really jumped out at me. So, I sat down on the couch and decided to watch Cake Boss.  No, we can't eat cake for dinner---although I do make a mean vanilla cake with strawberry buttercream.  :O) Back to the show.... as I watched my cake mentor from New Jersey, I saw a commercial for a new show called Kitchen Boss. Yes, Buddy Valastro is sharing his family recipes. I set the DVR to record every show and anxiously awaited the upcoming episode.
The first show we watched was titled "Date Night" and he made Chicken Sorrentino Fusilli, Roasted Asparagus with Crispy Breadcrumbs, and Tuxedo Strawberries.  I was hooked in the first 2 minutes and knew that this would be my first meal to contribute to the challenge. I watched carefully and didn't even need to write down the steps because he shares his recipes online in his Kitchen Boss Blog.
Here's a picture of the Chicken Sorrentino Fusilli that I made... it was quite simple, required LOTS of pots and pans, and was delicious!  But, I expected nothing less from "the boss" :O) 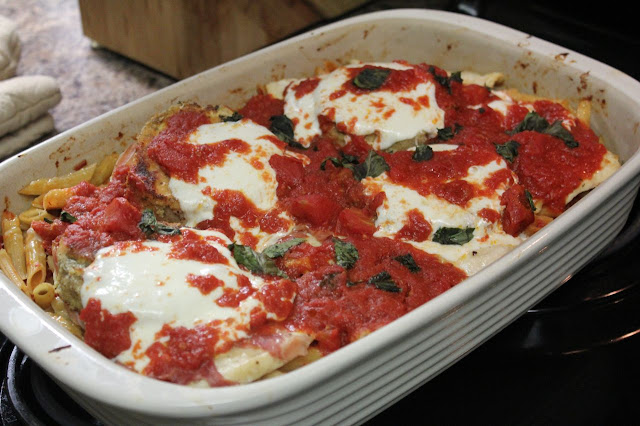 The asparagus was great, but too salty for our taste. Next time, I will make it using breadcrumbs but I'll skip the extra salt that the recipe calls for. 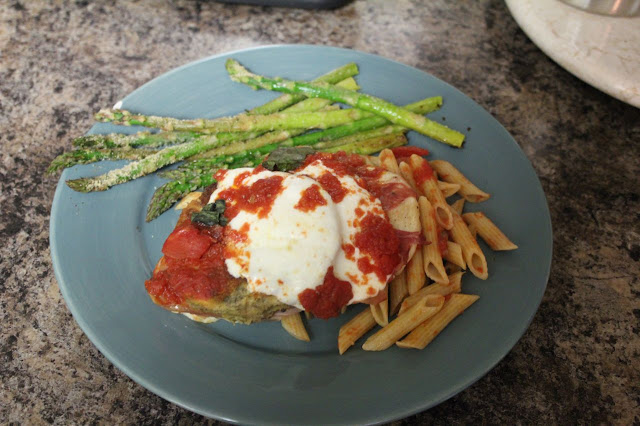 Now, for dessert!  Tuxedo Strawberries were on the menu.  Buddy made them look so easy!  I felt confident... I've worked with chocolate with Meamaw. She makes chocolate covered cherries, peanut butter crackers, and peanut butter balls at Christmas.

First step, melt chocolate over water. Oops--- I didn't realize the the glass bowl the holds the chocolate can't touch the water. Goodbye to the first half of the white chocolate chips.

Off to the internet I go--- YouTube. How do I melt chocolate?  I watched the videos and still burnt the chocolate.

Now, I'm desperate! I've only got 1 more cup of chocolate chips and a pint of strawberries that need a Tuxedo.  So, I used the microwave and 30 seconds later, I had melted dark chocolate. :O) Success

I dipped the strawberries and arranged them on a white plate.  Maybe they weren't wearing a tuxedo, but they sure tasted good. 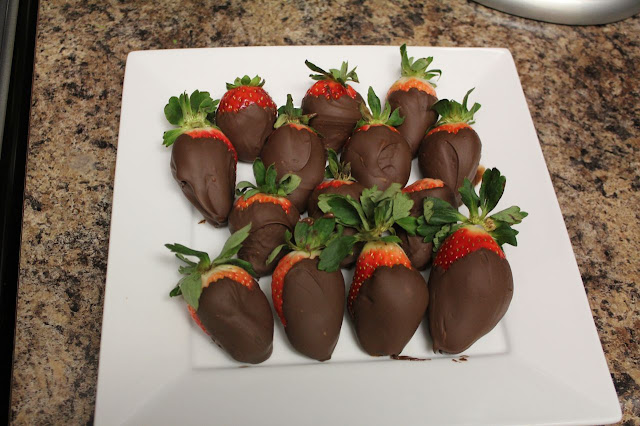 My first week on new recipe patrol was a hit! We ate all the pasta, even the leftovers, and the strawberries didn't stand a chance. It was really fun!
Posted by Brittany at 8:27 PM

Email ThisBlogThis!Share to TwitterShare to FacebookShare to Pinterest
Labels: Food